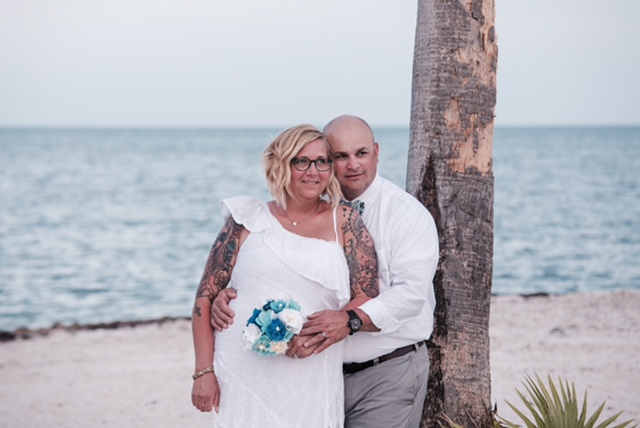 How did you get engaged? We had been happily living in sin together for two years and we were packing for a January weekend away at our favorite little hotel in Philadelphia. He was acting so oddly, I could see him perspiring a little bit on his face, pacing around our bedroom and I thought, Hmmmmmmmm, something is up. I was in our closet grabbing clothes to pack and I turned around to put them in my bag, and he was standing right behind me. He said, I can’t wait until we get to Philadelphia, I wanted everything to be perfect, but I can’t wait. I’m sorry. He pulled out a little vintage ring holder from his pocket, opened it up… and said, I love you, will you marry me? And of course, I said yes. Standing in our little closet, in our little bedroom, in our little house, it was perfect.

Catering? We had dinner reservations for two after our ceremony at the Butterfly Cafe on Marathon Key.

Photographer? Oh we chose a cute, quirky couple that took all of the pictures

DJ? No DJ, we were serenaded by ocean waves, the island wind, seagulls… and some little boy chasing after an eel swimming around in the reef just off to our right.

Florist? Me again! I decided that I would make my own bouquet out of crepe paper flowers.

Hair/Makeup? Me: Thanks to mother nature I had some fresh sunshine on my face, a few loose curls and mascara and done. He: Thanks to poor judgement with head protection and the sun, he was sporting a mean tan line.

Anything else you’d like to say?
A little history of us. We met when we were in 2nd grade. We graduated high school together in a small town in rural Pennsylvania. He driving his 1989 Trans Am and sporting a moustache, that could be mistaken for a dirty lip and I with my acid washed jeans and hair lacquered half way up to Jesus. Yes, my friends, it was 1990. We never dated in high school, he hung out with much cooler people (upperclassmen) than I. He had no time for me, and even hung out with my older brother! Ahhh unrequited love. He reconnected with me in 2010 through the magic of Facebook. I was in the Navy in Virginia Beach and he was living in Pennsylvania, we were both newly divorced. He sent a message to me and I thought Go pound sand buddy, you lost your chance a long time ago. But he wore me down and I decided it wouldn’t hurt to be friendly. Besides, it was more than a little flattering that he was interested in me. But I was busy finding myself again after my divorce and wasn’t interested in any sort of relationship. So, we were just friends for a few years and dated other people. I finally retired from the Navy in 2012 and moved to New York to be near family and to figure out the next chapter of my life, about 3 hours away from Brent in Pennsylvania. We were still friends, communicating through text messages… eventually that turned into phone conversations that started lasting longer and longer each time we talked. We eventually decided that he would come visit me in New York, so he drove up to visit me early in January 2013. He stepped out of his car, thankfully not the 1989 Trans Am, and it was the first time we had seen each other since we had graduated in 1990. We spent the day together driving around the area where I was living, visited with my parents, and we went out to eat – our first date.  When he left the next day, we knew that was it. I knew I had finally met the person who set my soul on fire and made me feel deep comfort all at once, this was the love I had hoped for all my life. And he felt the same way. Yippeeeeeeee! I moved to Pennsylvania the following month to go back to school for Graphic Design and to live happily, in sin, ever after. 🙂

Category: Real Weddings
Tags: family, love, Marriage, wedding
0
0
Your Cart
You're $35.00 away from free shipping.
Your cart is emptyReturn to Shop
Continue Shopping
Products you might like
Calculate Shipping
Apply Coupon
Loading Comments...